It is with a heavy heart that we must share the news of the passing of Mr. JR Shaw. As many in our community know, JR played a significant role in the lives of the families at Hull. I am honoured to have known him and am grateful for the moments that we shared, because it was in those moments- in each phone call, each email, and each face to face interaction, that I truly got to see the depth of his care for our children and families at Hull and beyond.

The below piece about JR from the 2018-2019 annual report reminds us of the inspiring human being that JR Shaw was. We are so grateful for his trust in Hull and we will continue to honour his legacy as we forge ahead in the work that we are doing. 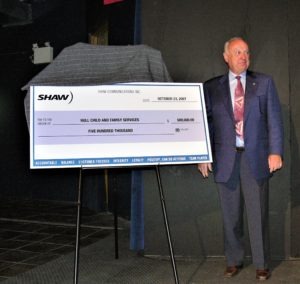 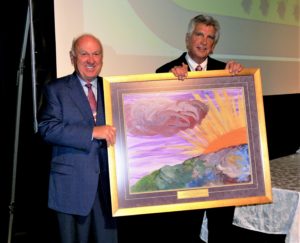 JR Shaw’s commitment to the Neurosequential Model of Therapeutics (NMT)

JR Shaw, the founder and Executive Chair of Shaw Communications, knows about commitment, especially long-term commitment. He and his wife, Carol, met when they were teenagers, raised four children and are proud grandparents of 12.

JR and Shaw Communications began their relationship with Hull in the late 1990s with a gift to the Hull Child and Family Foundation. Since this time, JR has remained committed in his support of Hull Services, including providing funding to build the Shaw Centre for Mental Health and Addictions on campus.

His generosity has made a significant difference to the lives of Hullâs kids and families. The Shaw Charity Classic and the Shaw Family Foundation have funded the work in the NMT over the last five years, allowing Hull to increase our capacity to work more effectively with persons served, and allowing Childrenâs Services to leverage the funding to educate over 3,000 caregivers across Alberta in 2016-2017, and over 1,500 professionals that same year.

JR embodies the value of âfamilyâ in his own life. On many occasions, JR has credited his father for beginning the Shaw Family Foundation, a Foundation which donates to organizations in need. He speaks affectionately about his own children, and about time spent with his grandchildren. He shows a keen interest in the families of those he interacts with, recognizing and often reminding all of us that no one is immune to the risks of mental illness.

Building relationships is a central piece of the science of healthy brain development, and JR exemplifies this with his genuine interest in developing relationships with those he works with and supports. JRâs strong commitment to relationships extends beyond that of his immediate family, with several relatives serving on the Shaw Family Foundation, as well as his freshman college roommate from Graceland College (now Graceland University).

Hull is grateful for JRâs committed investment and support, and we look forward to continuing to progress the work being done in partnership with Dr. Bruce Perry and the Neurosequential Model Network, LLC. Together, we can make a difference in the lives of the kids and families we serve, both at Hull and with our partners in Alberta and around the world.